free trial
Overview
dominKnow | ONE.
Authoring
Author more kinds of content for different moments of need.
Easy To Use
Everyone on your team can quickly start making great eLearning.
Collaboration & Review
Stop working in silos and start working together.
Responsive & Mobile
Toss the shackles and create responsive eLearning without limitations.
Publishing
Easily publish and distribute your eLearning.
Accessibility
Deliver accessible learning that meets all learners needs.
Translation & Localization
Simplify the process of translating and localizing your eLearning.
LCMS
Optimize how you create eLearning with the power of a LCMS.
Full Features Overview
A full list of our 100+ features.
Training
Get comprehensive training for dominKnow | ONE.
Blog
Learn how to create better online content and learning experiences.
Community
Engage and learn from peers in the dominKnow community.
IDIODC Livecast
Instructional Designers in Offices Drinking Coffee, live every Wednesday - join us!
Support
Contact our friendly, world-class support. 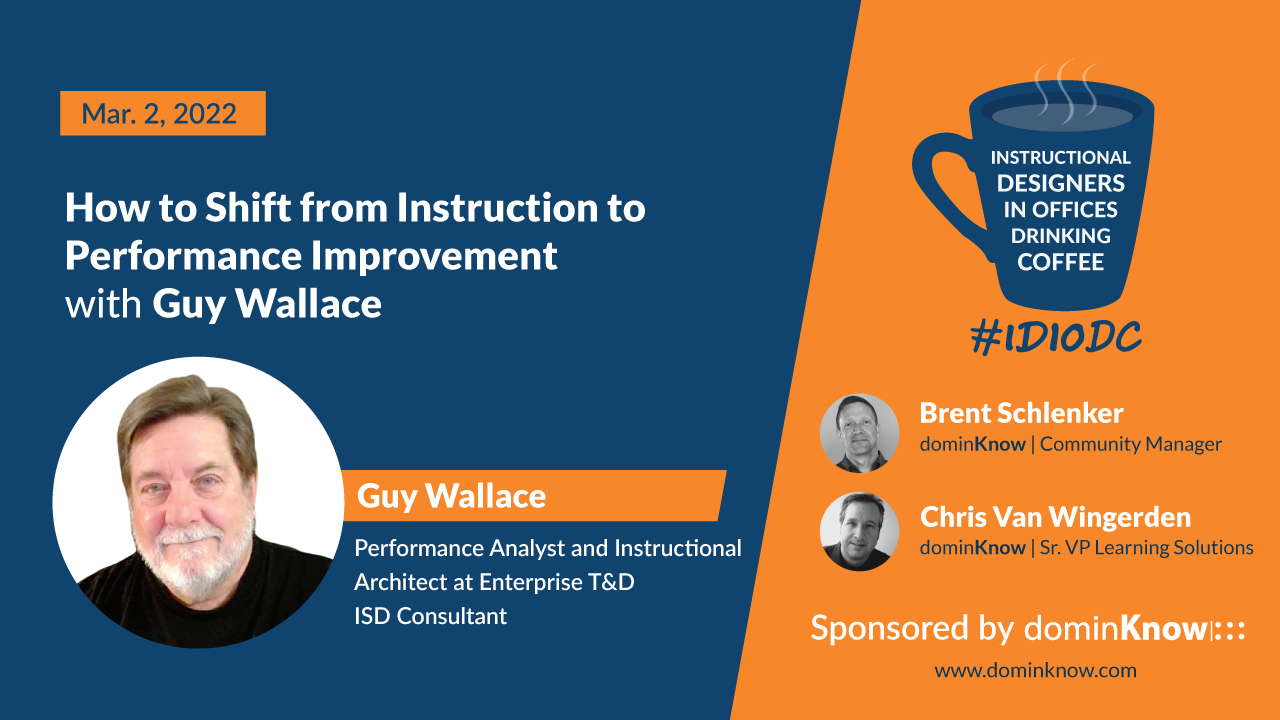 How to Shift from Instruction to Performance Improvement with Guy Wallace

Have you ever wondered why training solutions often don't actually solve business problems? Or maybe you just inherently know that the REAL issue is something other than a training issue. How can you be sure? And if you're right, how do you effectively communicate that to management?

Performance Improvement Consulting, or PIC, is an outstanding answer to that question.

Discovering root causes to performance problems is critical in your success.  Even if you're "just the instructional designer", you'll want to know if the work you're doing is going to have any impact on the business.  And if the business problem is not a problem that your training solution will solve, then you will fail. And nobody likes to fail, right?

Find all the comments from the chat and to check out the full session.

And to ask more questions, or participate in extended conversations about this episode, please join us in the IDIODC LinkedIn Group.

Guy W. Wallace is a Performance Analyst and Instructional Architect. As an ISD consultant, he has worked with over 80 clients since 1982. Prior to that, he worked in training functions for Motorola 1981-1982, and before that, for Wickes Lumber 1979-1981.

And he and his teams over the years have won awards for their work at AT&T, Change Healthcare, General Motors, HP, Imperial Oil, and Siemens Building Technologies.

He is the author of 20 books and over 100 published articles. His informative Blog Posts number just over 4,970 and his Blog followers number over 4,680.

His 1999 “lean-ISD” book received an ISPI Award of Excellence for Instructional Communications in 2002.

He has presented more than 140 times at international conferences and at local chapters of the International Society for Performance Improvement (ISPI), the American Society for Training & Development (ASTD), and at BPM– Business Process Management, the Conference for Nuclear Training & Education (CONTE), Midwest Nuclear Training Association, Association for Behavior Analysis, ASEE, and several Lakewood-Training Conferences, since 1983.

Guy was the treasurer and an executive director on the 1999–2000 board of ISPI – International Society for Performance Improvement, and was later elected to the position of President-Elect for 2002-2003, serving as ISPI’s President for 2003-2004.

Every Wednesday morning at 10am ET hosts Brent Schlenker and Chris Van Wingerden guide us through an upbeat and candid conversation with their guests from the eLearning and training world. The live cast session encourages peers to participate in the chat and share their own personal insight! After airing live, you can catch the learning podcast on all major streams such as Spotify, Apple, and Google Play podcasts, as well as on YouTube.

We could have been #1 but chair dancing was not a judged element. But no matter, we are simply happy to be selected. Check out this amazingly short press release: “IDIODC was selected as one of the Top 40 Learning and Development Podcasts on the web.”

How to Reframe Training Problems to Create Impact with Zsolt Oláh

eLearning ROI: How to Evaluate the Success of an eLearning Project

Looking for a new authoring tool?

Work better, together with dominKnow | ONE