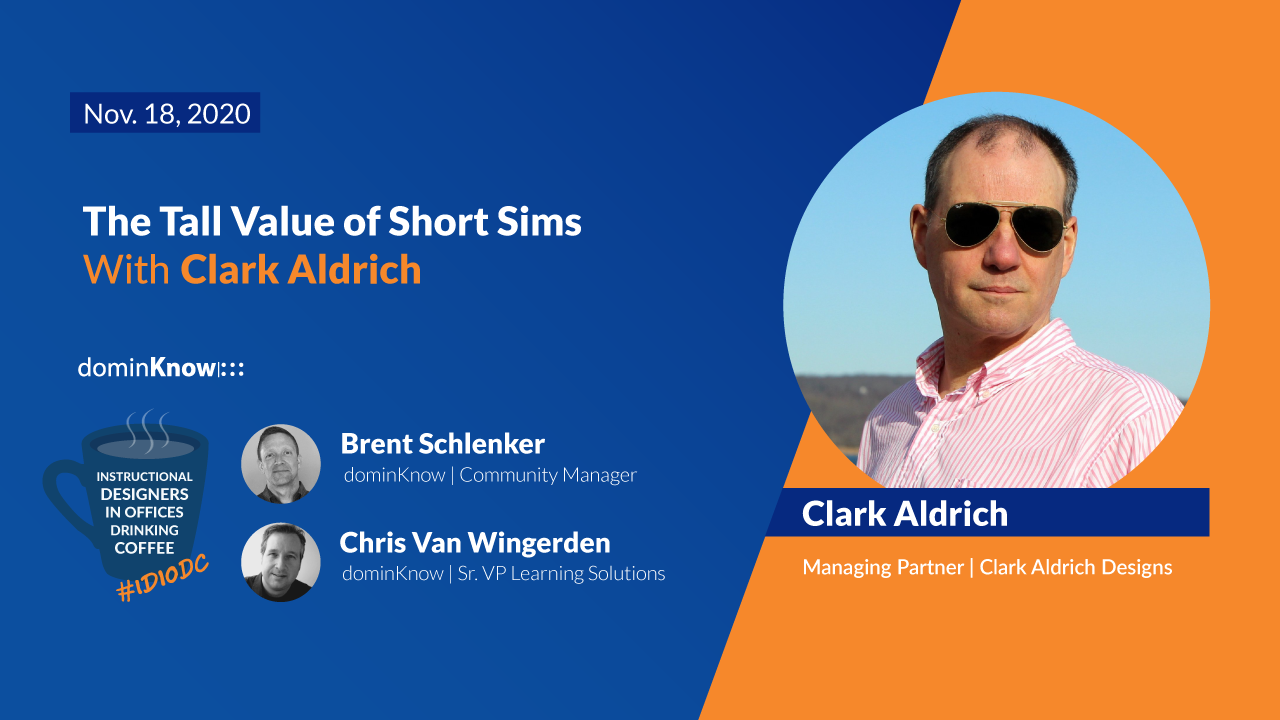 The Tall Value of Short Sims with Clark Aldrich

Just because you have little, or no, budget doesn’t mean training simulations are not an option. Actually, it's the perfect situation for beginning your journey into writing interactive simulations.

In this episode of IDIODC, Clark Aldrich talks with us about the power of simplicity in writing and creating training simulations. And if you’re not convinced of it yourself, maybe it would help knowing that Clark has been designing, building, and studying simulations in training environments for several decades. He understands more than most about the importance of doing, not just knowing. And that far too often eLearning courses focus on more of the knowing and less on the learning.

And perhaps that’s because simulating real experiences has always felt out of reach, and only meant for the military, flight school, and medical training. Clark argues we need to get past that and think about how we can use the tools and skills we all have to create better, more simple, “short sims”.

Clark shared examples of short sims and explained how easy it is to create them.

The important work, he explained, is in the design – connecting with your SMEs and workers to better understand the process, the doing.

One of the most important questions to ask is, “where are mistakes made?” Once you fully understand the work, the doing, then writing the branching structure becomes easy.

An important point made early in the conversation is to not let the learner travel too far down the wrong path without corrective feedback.  However, our very astute chat room questioned that and asked if perhaps there is more learning in allowing the user to fail completely because that’s what would happen in the real world.

It ended up being a great conversation and most of us landing at the need to create a solid balance between too little and too much corrective feedback.

The chat room also discussed the varying opinions on using clipart vs. more realist photographic representations.  But the point Clark strongly emphasized is that with short sims it should be easy for everyone to make one.  Simple does not equal less effective.  In most cases, keeping the writing short and simple, as well as the imagery, is exactly what is required.

There are many reasons to consider short sims and we covered most of them.  It was a fantastic conversation.

Check out the full session including the always-informative chat right here.

Clark Aldrich is an author and practitioner in the field of educational simulations and serious games for education and professional skills. He has been the lead designer for several educational simulations, including SimuLearn's Virtual Leader which won best online training product of the year in 2004 by Training Media Review and the American Society for Training and Development's T+D Magazine - the first game-like product to win.

His published research, beginning in 1999, outlined the failure of formal education approaches to teach leadership, innovation, and other strategic skills, and then advocated interactive experiences borrowing techniques from current computer games as media to fill these gaps. He argues that computer games represent new, "post-linear" models for capturing and representing content, but that new computer game genres will have to be created, optimized for learning as well as entertainment. His research and simulation design work, which he conducted outside of the influence and prescription of academic and grant-giving institutions, resulted in a series of articles, speeches, and five books.