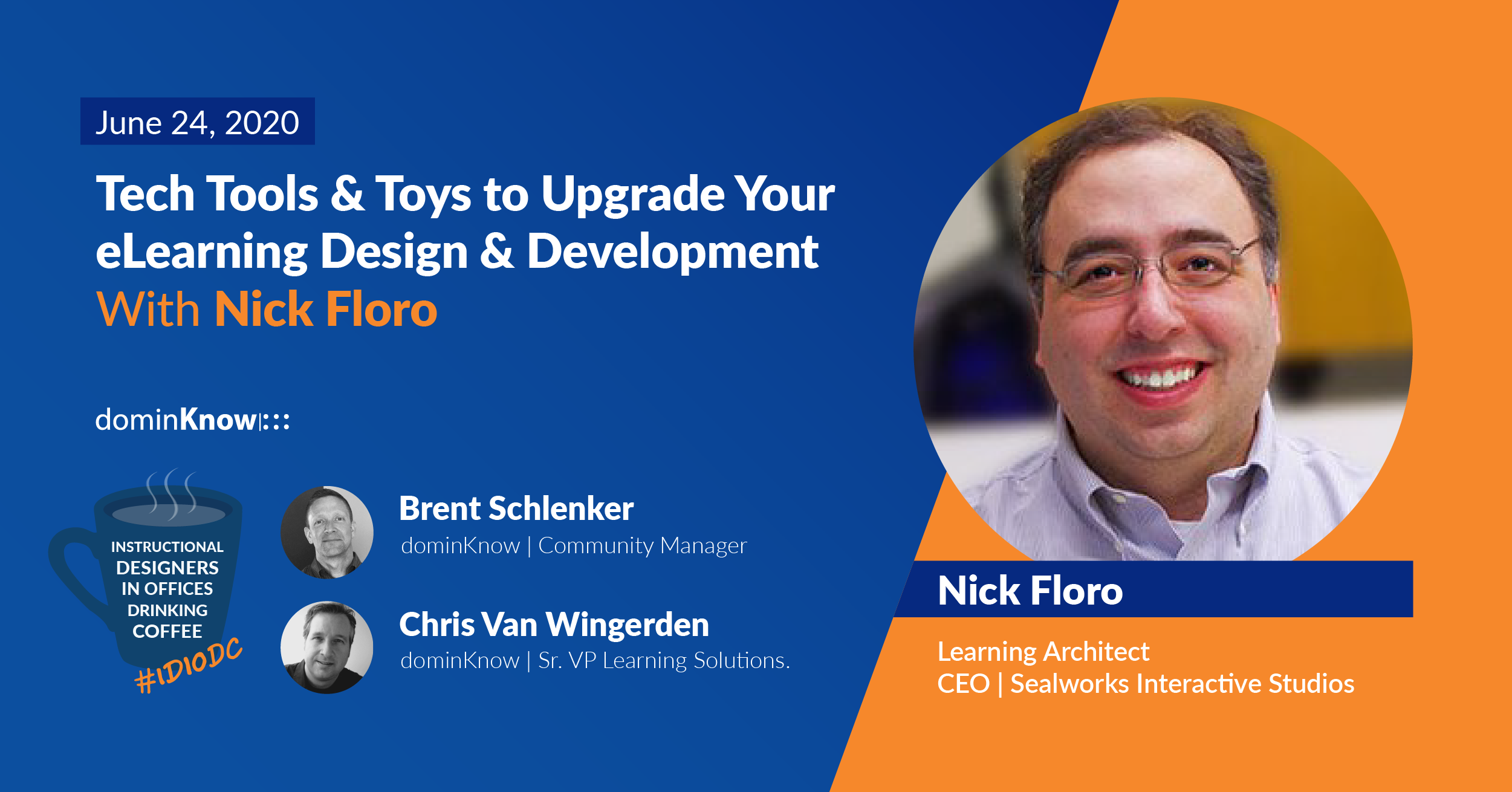 Most elearning designers and developers working in an enterprise don't have much say in the LMS or authoring tool provided by their company.

But successful elearning practitioners always have a few additional tech tools and toys that level up their production capabilities. Building your own tool kit is part of being a successful elearning designer in today's work environment, and even more so in a post-COVID workplace.

This episode of Instructional Designers in Offices Drinking Coffee (#IDIODC) was a fast-paced show with our favorite media stage host, Nick Floro. Nick is known for curating and sharing the best applications and platforms that support all the other aspects of the work we do in elearning design.

Since we were doing a live video session, we started by talking fantastic applications for streaming video production like OBS (Open Broadcaster Studio) and Elgato.  And a great collaborative whiteboard called Miro, which we used during the session. Nick saved the sample Miro board that we all created together so you can see it for yourself.

Our chat room in the session also shared some apps and platforms as alternatives. You’ll need to scroll back through the chat to find that stuff. If that sounds like too much work for you, then you’re in luck. Nick has created a list of his tools and toys. The list is in the Dropbox platform made in their app, Paper.

Sidebar.io is another app that Nick introduced us too. It compiles an interesting aggregation of design content each day and is a great place for design inspiration from outside the elearning design world.

If you’re an, ahem, older professional you may remember the RSS feedreader boom back in the 2000s. Over time that feature set got rolled up into other applications.

Nick recommends Feedly, and I concur. It really is the last remaining RSS feedreader that continues to be supported and has a large user base. Many people also transitioned their need for content aggregation to an app called Flipboard.

And I can’t forget to mention Reflector, which Nick used during the session. This is a wireless screen-mirroring application that lets you display your iPhone or iPad screen on your desktop so you can show it during live streams or even record the iPhone or iPad screen for elearning videos.

On a side note, Kevin Thorn uses Reflector when he does Drink’n’Draw sessions with us on IDIODC, like this episode showing us all how to create our own stylized images for our elearning projects.