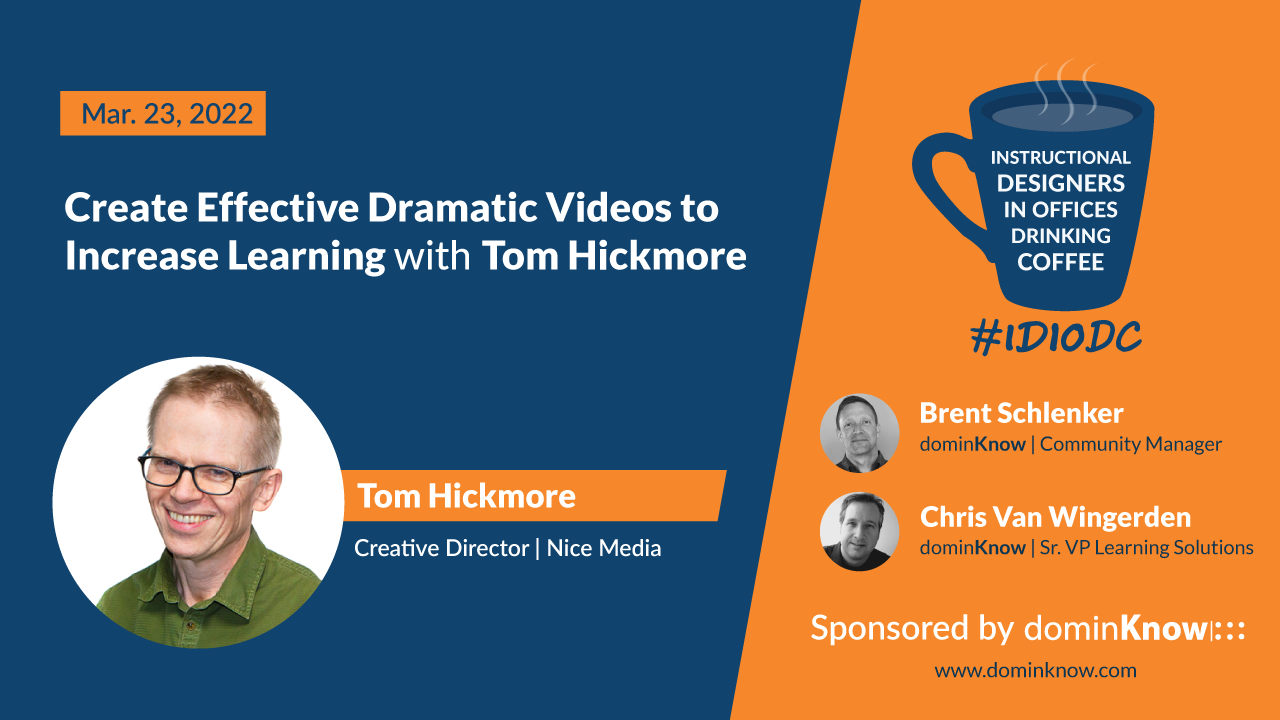 As instructional designers, we're often working on projects related to very specific processes.  We want to be clear, precise, and concise, in training that process.  However, there are many other situations where training is asked to influence behaviors and build better cultures.  This requires nuance, and creating training that impacts how the learners feel.  This is where dramatic storytelling has a powerful effect for learning.

Gagné's 9 events of instruction puts "gaining learning attention" at the number one spot for a reason. If you can't get your learners to pay attention and to feel something on an emotional level you are not likely to persuade them let alone help change their behavior. Video is the perfect medium for providing that positive impact.

However, if done poorly, it can have a negative effect.  It's not easy, but if you can learn some of the basics and practice with small projects and shorter videos you will begin to see positive results.

Tom Hickmore creates award-winning dramatic instructional videos and joined us to talk about how he does it. Drama for learning is his specialty.  A niche not many instructional designers delve into.  We'll talk about the role of drama in the workplace, storytelling, character design, writing dialogue and more.

You can learn more about his work at https://www.nicemedia.co.uk/ and also buy his latest book on the subject titled Watch & Learn: Designing, Writing, Commissioning & Producing Effective Video Drama for Learning.

To see all the comments from the chat, check out the full session right here.

And to ask more questions, or participate in extended conversations about this episode, please join us in the IDIODC LinkedIn Group.

After early success as a video artist, Tom Hickmore began making corporate video in 1987 and has specialised in drama for learning since 1996. Tom has worked for an enormous range of clients in pretty much every sector. Courses he’s contributed to, video he’s made, plus his personal short films have all won awards. Most recently a video he developed and directed - Safeguarding Adults, Level 3 (for Health Education England) - won the 2021 Learning Excellence Awards, Healthcare category for video content design and creation.

Trivia: Tom is half Danish. He collects badges (buttons). He made viral comedy films in the early days of the internet which got millions of hits. He’s written 7 unproduced feature films and used to be in a pop/punk band with 3 women called Sexlovebusterbaby!

Every Wednesday morning at 10am ET hosts Brent Schlenker and Chris Van Wingerden guide us through an upbeat and candid conversation with their guests from the eLearning and training world. The live cast session encourages peers to participate in the chat and share their own personal insight! After airing live, you can catch the learning podcast on all major streams such as Spotify, Apple, and Google Play podcasts, as well as on YouTube.

We could have been #1 but chair dancing was not a judged element. But no matter, we are simply happy to be selected. Check out this amazingly short press release: “IDIODC was selected as one of the Top 40 Learning and Development Podcasts on the web.”

How to Create Better MicroLearning Videos with LaTarshia Wooten

Looking for a new authoring tool?

Work better, together with dominKnow | ONE