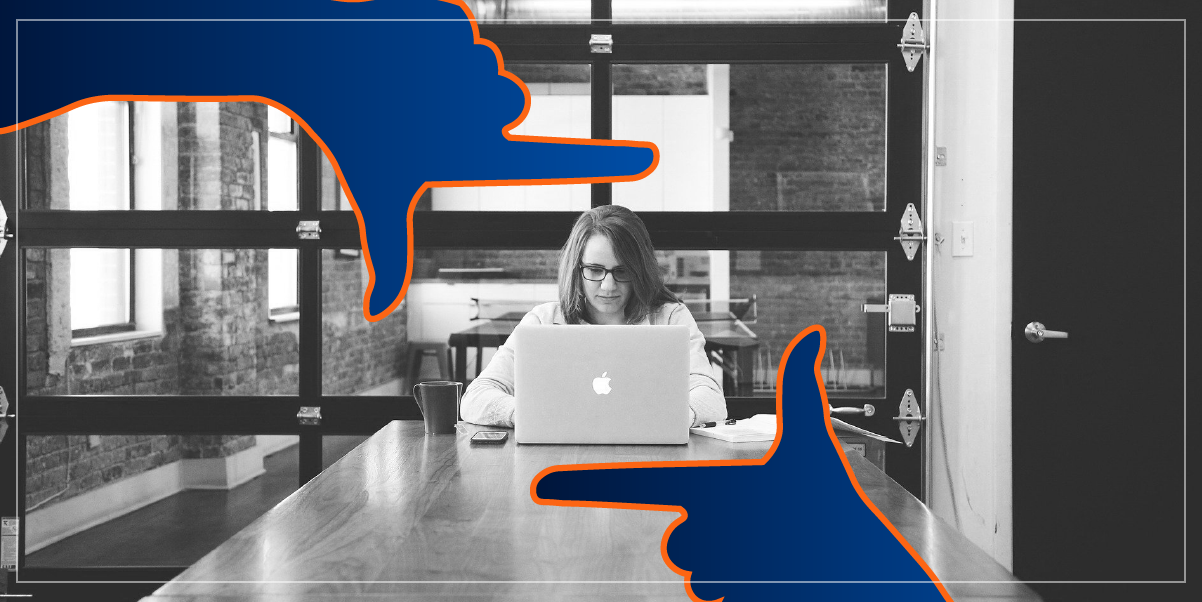 I’ve talked in the past about how video was recognized as a powerful tool for learning as far back as the earliest days of film.

Video's ability to show realistic and clear examples of tasks, for instance, and its authenticity are both great for supporting a learning process like an elearning course.

The techniques used in film and video production industry also give us some tools to improve how our audience connects with the video-based elearning we create.

Many of those techniques are easy to start using and can have a tremendous effect. A good example is the technique of framing.

As a training professional tasked with creating video-based elearning, one of your main goals is to engage your user.

In some cases, you may only need to point the camera at a process that is occurring, press record, and capture the activity.

Sharing that video in its raw unedited format is useful when getting the video to your audience quickly is more important than video quality.

These three shots can help you, whether you’re creating a highly narrative-based elearning project or even just capturing a subject matter expert (SME) in a simple talking-head type video.

Before we get into framing your shots, I want to briefly mention motion.

An amateur with a video camera or mobile device will press record and shoot one long shot while walking around, zooming in, following the action, holding the camera out and then pulling it back, running, walking, you get the idea.

The result is a vomit-inducing roller coaster ride for the viewer. And most of the needed information is lost outside the framing, blurred by too much movement, or transitioning from too dark to washed out because of extremely different lighting situations. And that’s not helpful at all in video-based elearning.

Framing improves the effectiveness of your video-based elearning for many reasons, but the simplest is that it almost guarantees a useful recording that delivers your intended content in the context your learner understands.

(For other practical tips on making effective videos with your mobile device check out this episode of our weekly video cast Instructional Designers in Offices Drinking Coffee or IDIODC.)

Okay, What Do We Even Mean By “Framing”?

Now that you know to stand still and not move the camera, you might be wondering what it means to “frame” a shot.

It’s quite simple. Show all the things that need to be shown within the edges of screen.

You could just step back and shoot one continuous wide shot and use that in your video-based elearning. But then there would be too much visual information distracting the viewer from what’s important.

Or you could get up close to your subject for just a close-up but then your viewers might be left wondering where this interview is taking place and left distracted by thinking about the missing information. You need both and something in-between.

The classic wide, medium, and close-up shots and all their variations edited in a sequence solve these problems. Together they create context, focus attention, and evoke an emotional reaction in your viewer. All of which are important for learning.

By the way, you should do this with your mobile photography/videography as well. It’s become such a strong habit for me that I even get these shots on family vacations.

In screens from an example shared with us by Dan Keckan, CEO of cinécraft, you’ll see how the great cinematic techniques can also be applied by instructional designers to create more effective interactive video-based elearning.

And keep in mind, these can help whether you’re creating formal video-based courses to host in your LMS or informal learning videos to help leaners on-demand.

Wide shots typically start a movie, a new act or scene. Even the worst low budget movies use the wide shot in setting a scene to create context.

To get a wide shot with your camera, use zero zoom and stand as far back as you need to in order to show enough of the setting so that your viewer can recognize where you’re taking them.

The wide shot is also known as the “establishing shot” and for good reason.

Wide shots are the best way to frame as much of a location as possible. This establishes the setting and communicates a lot about what comes next. It creates a context for the viewer.

In cinematic classics, like Psycho, the opening scene (link: https://youtu.be/1nf3D0AGZkU) starts with a wide shot of downtown Phoenix, Arizona. And yes, it has camera motion. But done professionally “camera moves” are quite effective. Hitchcock was the master of cinematic camera moves and we’ll discuss that in another article.

But that’s at the box office. What about video-based elearning?

The key to the establishing shot is creating context for your learners as well.

If they don’t understand how the time they spend in your elearning course applies to the larger context of their job or business then you’ve already lost them.  And within the context of your interactive course your wide shot establishes the context of the scenario you are attempting to recreate.

In cinécraft’s retail customer service training course, the situation is established with a wide shot as the customer enters the store. Because it’s an interactive video-based elearning course the user is presented with a question before the next shot is displayed. How the user answers will determine which shot they see next.

The medium shot is not as simple.

It is mostly dependent upon the wide shot and close-up. In the spirit of simplicity let’s just say it depends on the overall scene and the size or style of both the wide and close-up shots. Whatever feels comfortably in the middle is your medium shot.

You may be introduced to terms like “tight medium shot” or “full medium shot” or “the cowboy shot”. There is even a “full shot” which is a bit of a hybrid between the medium and wide shot. And that’s why they also sometimes call it... yes, you guessed it... “the medium wide shot”.

The medium shot varies in its framing of the image as much as in its name but its role remains the same.

It takes the viewer one step closer to the part of the wide shot that is the focus for the story to continue.

In your video-based elearning, the medium shot helps you narrow down the number of distractions presented to the viewer in the wide shot. You're forcing them to focus on the exact part of the wide shot that is most important to the story.

In the retail training example, we established the context of the scenario with a wide shot and a question for the user to respond to.

The next steps of the interaction move to a medium shot to begin questions about how to engage this customer known as the “browser”.

And once again, you might think this is self-explanatory.

And a close-up is pretty much what you might expect. But there are variances here as well.

One director’s close-up may be another director’s “medium close-up", or “extreme close-up".  And once again we’re left to understanding the close-up by the shots that precede it. It’s all about context and building a story.

The most useful purpose of the close-up is emotional.

It focuses the viewer on the exact emotion we hope to create in the viewer.  A nervous hand tapping a cigarette over an ashtray. A tear welling up and rolling down someone’s face.  A smile or a frown being directed at you. These all cause you to respond emotionally.

The closeness of the close-up depends on many factors.

You’ll see it used regularly in film, but not so much in television shows.

However, news interviews often make extensive use of the closeup so the viewer can feel like they’re having the conversation with the person being interviewed. And if an interview subject is ever on the verge of showing strong emotions you’ll almost always feel the camera operator begin to slowly zoom in.  Great videographers have a sense of timing that gets this shot right every time.

The cinécraft interactive video-based elearning has multiple shots used for different parts of the scenario based on how the user answers the questions. This is another reason why understanding these three simple shots is important.

To get started using framing to make your next video-based elearning course more effective, keep your camera still and frame your shot.

After mastering these basics, you can move on to learning how effective camera movements can further enhance your video-based elearning content.

You don’t need to become a professional cinematographer but understanding and practicing a few of the fundamentals can improve your video-based elearning.  You don’t even need more than just your smartphone to start bringing these shots together by editing.

The single most important part is knowing that these three shots are useful.  Whether you’re recording your own video interviews with SMEs or recording a manufacturing process, all three shots apply.  You may not use the shots, but you’ll be glad you have them if you need them.

And check out dominKnow | ONE’s features that support video-based learning.

You can incorporate video easily into any project and create interactions around it, from simple questions to full navigation branching. Take these features for a test-drive by signing up for a free trial.